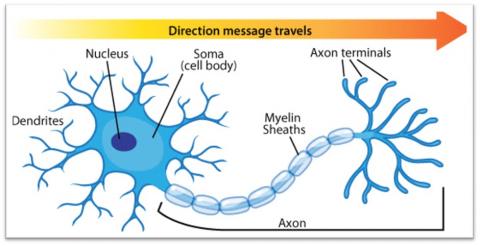 What more could a PwP or carer want (or need) to help them through the jungle of articles, reports and Webinars that are all so fascinating, but so easy to get lost in without the requisite scientific background or speakers and authors who talk to the non scientist.  If you have an understanding of any other terms which have helped you then please complete a comment box below and we will add them to the glossary. We hope that this glossary will help!

The glossary can be found in the About section: Glossary

Diagram of a neuron: 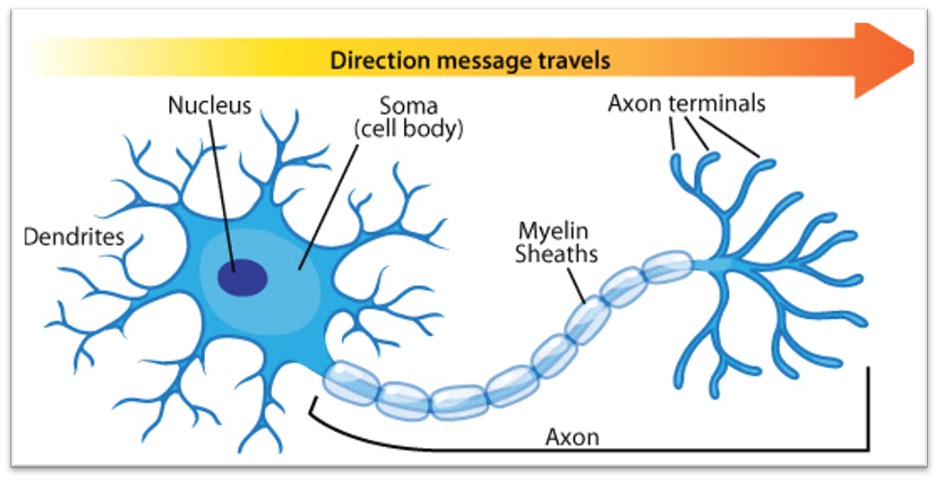 Alpha Synuclein (also α-synuclein): A protein of great interest to Parkinson's researchers because it is a major constituent of Lewy bodies, protein clumps that are the pathological hallmark of Parkinson's disease.

Basal ganglia: A structure located deep in the brain that is responsible for normal movement such as walking. The basal ganglia is made up of three main parts, the caudate nucleus, the putamen, and the globus pallidus.

Bradykinesia: Slowing down of movement.

Bradyphrenia: Slowness of thought common to many brain disorders.

Carbidopa: A drug that is usually given in combination with levodopa; the combination is called Sinemet. Carbidopa improves the effectiveness of levodopa and can be used to reduce the side effects of levodopa.

Cogwheel: Stiffness of the muscles characterized by jerky movements when arms and legs are moved repeatedly.

Deep brain stimulation (DBS): A surgery that includes the implantation of permanent electrodes in various parts of the brain through which continuous pulses of electricity are given to control the symptoms of Parkinson's.

Disease modifying therapies: Any therapy that has the ability to alter the course of disease progression.

Dopamine: A chemical that assists in the effective transmission of messages from one nerve cell to the next. People with Parkinson's have decreased amounts of the chemical in the basal ganglia and substantia nigra, two structures located deep in the brain. Dopamine coordinates the actions of movement, balance, and walking.

Dopamine agonist: Drugs that copy the effects of the brain chemical dopamine and increase the amount of dopamine that is available to the brain for use.

Dyskinesia: Abnormal muscle movements. May appear as a side effect of long-term levodopa use in Parkinson's.

Dystonia: A neurological movement disorder syndrome in which sustained or repetitive muscle contractions result in twisting and repetitive movements or abnormal fixed posture

Gene therapy: An experimental technique that uses genes to treat or prevent disease

Idiopathic: An adjective meaning "of unknown cause." The usual form of Parkinson's is idiopathic Parkinson's. 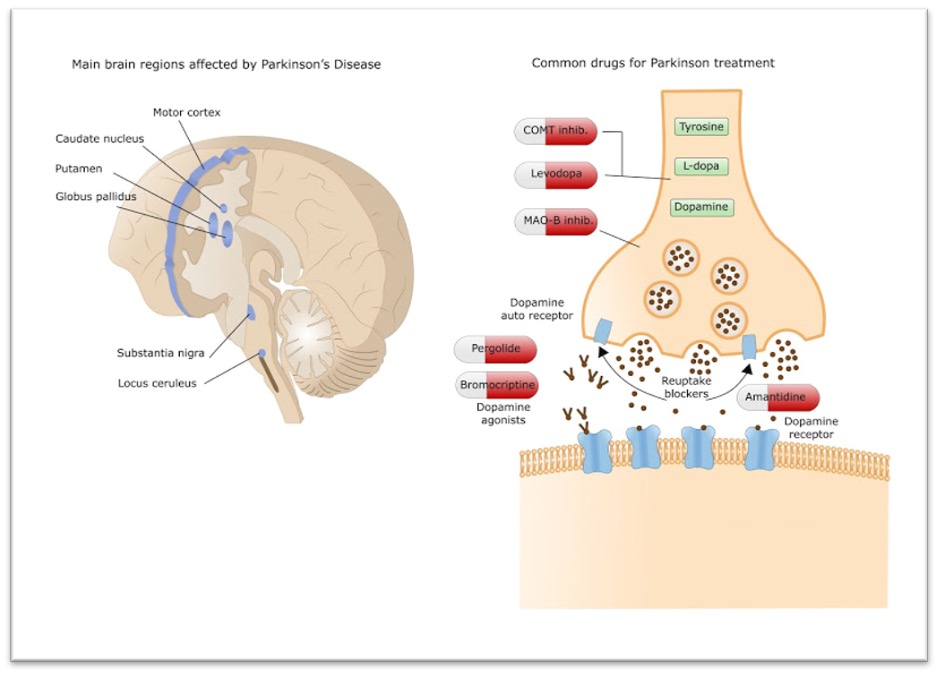 IPS Cells: Induced pluripotent stem cells are made by removing mature cells from an individual - often from the skin - and reprogramming them to behave like embryonic stem cells. They can then be coaxed into dopamine-producing brain cells

Levodopa: A chemical that is the precursor to dopamine. It can pass through the blood-brain barrier (whereas dopamine cannot). It is the most common treatment for the symptoms of Parkinson’s disease.

Lewy body: Brain cells that have abnormal pigmented spheres inside them. They are found in the damaged parts of the brain in people with Parkinson's disease.

Micrographia: The tendency to have very small handwriting due to difficulty with fine motor movements in Parkinson's disease.

Mitochondria: Organelles inside every cell that are considered the power generators of the cell, converting oxygen and nutrients into adenosine triphosphate (ATP). Evidence suggest that mitochondrial dysfunction plays a central role in the pathogenesis of Parkinson's disease.

MPTP:  A toxic chemical, exposure to which causes Parkinson's disease symptoms in some intravenous drug users. It is now used to produce Parkinson's symptoms in laboratory animals to study the disease.

Neuroinflammation: Inflammation of the nervous tissue. It may be initiated in response to a variety of cues, including infection, traumatic brain injury, toxic metabolites, or autoimmunity. It has been heavily implicated as playing a role in Parkinson’s disease.

Neurotransmitter: A specialized chemical produced in nerve cells that permits the transmission of information between nerve cells. Dopamine is one example.

On-off effect: Fluctuations that occur in response to levodopa treatment in which the person's mobility changes suddenly and unpredictably from a good response (on) to a poor response (off).

Parkinsonism: A group of symptoms that include tremor, rigidity, bradykinesia, stooped posture, and shuffling gait. The more common causes of Parkinsonism are Parkinson's disease, striatonigral degeneration, and a reversible condition induced by certain drugs.

Receptor: A structure located on the nerve cell that receives chemical messengers (neurotransmitters, such as dopamine). This is how nerve cells communicate. Most of the drugs used to treat Parkinson's disease are designed to interact with nerve cell receptors

Sinemet: Brand name(US) for the Parkinson's disease drug that is a mixture of levodopa and carbidopa.

Stem cells: Stem cells are cells with the potential to develop into many different types of cells in the body. They are often used in laboratory experiments and are considered a potential therapeutic tool for transplantation in people with Parkinson’s disease.

Substantia nigra: A structure located in the midbrain that plays an important role in reward and movement. It is Latin for "black substance" as parts of the substantia nigra appear dark due to high levels of neuromelanin in dopaminergic neurons. Parkinson’s disease is characterized by death of dopamine producing neurons in the substantia nigra.

Thalamus: A large group of brain cells centrally placed deep in the brain near its base and serving as a major relay station for impulses traveling from the spinal cord and cerebellum to the cerebral cortex.